Bitcoin is a cryptocurrency that has been taking the world by storm in recent months. It’s essentially a digital currency that allows users to trade and spend online, just as if they were using their own country’s currency.

The transactions take place peer to peer, with no third party involved. The coins can either be bought via a broker or ‘mined’, although the latter takes a huge amount of money and resources to do successfully. The currency can be used with other products as well, either selling them for a different currency or investing in companies.

Many bookmaker affiliates actually allow Bitcoin as payment for revenue generated. Whilst payments to bookmakers direct are still in the development phase, the number that have started to accept the currency continues to grow; and as Bitcoin becomes more mainstream and more people start to know and trust the currency, we expect to see these numbers rise even further. 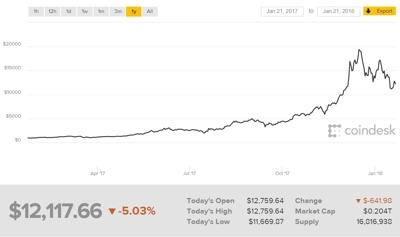 One of the reasons why Bitcoin became so popular in the betting industry is that, since it is a digital currency, it’s not linked to any country or government, so can’t be seized or traced. It’s been huge for markets such as the US where banking with debit cards – for the most part at least – is prohibited. Bitcoin offers an alternative route that is secure and also legal.

As a bettor, it allows you to keep a record of your money and where it is heading. Many people like to keep their betting accounts separate from their personal accounts, allowing them to see a quick overview of what’s come in and what’s gone out.

Bitcoin also offers the opportunity to make money without doing anything at all. At the minute, the market is highly volatile and has seen huge gains. For example, 1 Bitcoin in April 2017 was worth around $1,000, and by December 2017 the same 1 Bitcoin would have been worth almost $20,000. The growth has been astronomical and has seen rises that few currencies have ever seen before.

The flip side of this volatility is that you could lose money if you get in at the wrong time. The value has crashed as well as spiked, but has always regained its value again afterwards. Eventually, we fully believe that the market will stable, but for the time being it’s worth just enjoying the ride as who knows how high the currency is going to grow in value. The old advice is the best; buy low, sell high.

Bitcoins are all held in what is essentially a virtual vault. If you purchase one (or a proportion of one), you get a long encrypted log in made up of random numbers and letters with a password attached to access it. It’s about as secure as you’re ever going to find, and some experts even state that it’s more secure than using your personal bank – although we aren’t quite convinced of that just yet. If a bank loses your money chances are you will get it back, if your Bitcoin wallet details get into the wrong hands then you’ve had it.

The issue is that the currency is totally digital, there is nothing tangible about Bitcoin so it’s not as if you can just store it under your mattress. Whilst online algorithms are very tough to crack, we would be lying if we were to say that they are impossible. Everything comes with its own risk and Bitcoin is no exception, but from what we’ve learned, we’d say that it isn’t any less secure than using your debit card or even e-wallet.

The cool feature about using Bitcoin has to be the fact that you can make money from it without even betting. The amount it’s risen in value in recent months is huge, and many experts believe it will only keep rising.

We also like the fact that getting hold of your money comes with very few, if any, transaction fees. Even bookmakers are starting to waive fees, which shows the process of getting money in and out is improving.