There are few things more iconic in football than The Pools. They’ve been about in some form since 1923, and many believe that if it wasn’t for The Pools then we would not have the betting industry that we have today.

What was so amazing about the concept back in the day is that it could unite towns and villages, with a huge number of people taking part in the game via the reps that went door to door collecting the coupons, and then discussing their choices with their neighbours.

Obviously, no one goes door to door anymore but the pools is still available as an online service, like most betting formats.

What are Football Pools & How do They Work?

The Pools is basically a game which is linked to the football matches that take place on a Saturday afternoon. The games that are covered are played within the UK and most of them have a 3pm kick off time, although this has been adjusted in more recent years to include both the early and late Saturday kick offs.

The concept of the game is that you need to choose 10 fixtures from a list of 49 games that you think are going to end up being a score draw. Just like with football matches, you are awarded points for the number of correct decisions that you make.

The points structure is as follows:

The game then takes the score from your 8 best picks and combines them. The maximum you get is 24 points, which will be a winning score, but there are consolation prizes for scores of 23 and 22 points.

The cost of the game is just £1 to play, and this includes your 10 selections. But you can opt to choose more selections from the list, with 11 picks costing £2.75 and 12 picks costing £7.50. Obviously the more you can choose the greater the chance of winning, but the higher the cost.

One of the biggest draws to the pools is that there is a £3 million jackpot attached to each game. This jackpot is paid out on getting 9 correct score draw results from your picks. Whilst getting just 1 more than the usual 8 may sound like not much of a leap, the jackpot has only been won a handful of times, so it’s evidently much harder than it looks.

Can you Still Play the Pools?

It’s crazy how many people ask this question and are surprised when we tell them that yes, you can still play the traditional pools game online. We think that most people are so surprised because the marketing approach that the game uses doesn’t seem to be in keeping with other betting brands in the industry, so they don’t hear about it as often.

One of the biggest marketing campaigns that The Pools were able to launch was when they linked to the classified results that used to get read out each week on programs like Grandstand, highlighting which games had been eligible for pools wins or if they were involved at all.

The game is still very much the same as it used to be. The inclusion of additional lines for added money is one of the only developments from the original game in 1928. They’ve also needed to modify which matches are included given that so many games have moved from 3pm on a Saturday to accommodate TV contracts.

Aside from that, the game is alive and kicking in the exact same format, and with a £3 million jackpot attached to each game it boasts one of the biggest prize pools that you can win online, period.

This is where the “Pools” brand has developed the most, and they have added a whole host of other games. Some are made by the same company and some have come from other bookmakers, but they are all undeniably linked to the success that The Pools has seen over the last century.

This game is a take on the Both Teams to Score bet that is now one of the most popular bets in the industry, largely down to Betfred’s Goals Galore. With this, you have 35 games to choose from and you need to pick 8 matches from that list that you think will see goals from both teams.

The game comes with a £1million jackpot from just a £2 bet. To trigger the jackpot, you need the games to be the first 8 matches on the coupon, but if they are not then you just get a share of the top prize. On average, the top prize pays out around £800. You also get a consolation prize for 7 correct answers. The company states that the game’s consolation prize has a 16x higher return than acca insurance.

Match bet is one of their latest inclusions, and it also marks the first time that they have moved away from the original Pools ethos. With this, you are essentially getting a long list of games from the UK and across Europe from which you must choose a Win-Draw-Win result.

It works the same as an acca would, with each game individually priced and also offering an overall payout. You can choose your stake and your payout is then reflected by the odds that you have taken. As we say, this is the closest The Pools gets to ‘traditional’ bookmaking, so it’s a big step for them.

Soccer 6 is where they give you a look at 6 games that are handpicked for that day (or sometimes game week), and you need to choose the correct result for that match. You can choose between home win, away win, or the draw.

If you get all 6 results correct then you win the pool for that week, and if there are multiple winners then you win a share of the pool. You can apply additional results for each game, but this will increase the number of lines that you play and the overall cost of the game. With each additional result, your stake will double.

They state that on average, a winning payout will be around £1,200 for this game.

The Premier 10 is a beefed-up version of the Soccer 6, but instead of picking 6 games you are picking from 10. Again, you will need to choose between the home win, away win or the draw, and you can include more than 1 result per match which will increase the number of lines that you play.

The Jackpot 12 game allows you to choose from 12 matches. The game starts at 50p per line, which is the cheapest stake of any of the pool games.

It’s a familiar game though, and you just need to choose the result from 12 selected games. You can include multiple results for this if you wish, which adds to the pay lines that are used.

Outside of The Pools own variations, there are a number of bookies that have jumped on the bandwagon and offer their own football jackpots.

These work in very much the same way as some of the above, with the bookmaker offering up a list of games that you need to pick results from; get all the results correct and you win a share of the jackpot.

You could even argue that the likes of Betfred’s Goals Galore coupon, which is now one of the most popular in the industry, came off the back of the initial Pools jackpots. In fact, most bookies have had their own version of a football jackpot at some point, which has largely been down to the success of The Pools.

History of The Pools

The Pools was first instated by John Moores back in 1923. Moores was the owner of Littlewoods at the time, and the early days started with him selling his Pools tickets outside of football grounds, such as Old Trafford in Manchester. The success of The Pools was apparent by the number of other companies that were quickly set up to try and get a slice of the action; these included the likes of Vernons, Zetters and Brittens.

By 1946 the company and the game were both thriving. They were able to start adding new games into the mix, with the first being that of the Treble Chance game. They’d also been able to include the Penny Points and the Penny Results markets by this time. But it was the Treble Chance game that was the first of the large jackpot games on offer, at a time when no other bookmakers were offering them.

One of the first and biggest jackpot payouts in the country came from the Pools, collected by Nellie McGrail from Stockport, who bagged a massive £205,235 in 1957. Since then, the Pools has made multiple millionaires.

Before the Lottery came into being in 1994, The Pools had over 10 million regular customers. By 2007, this number had dwindled to just 700,000. Smaller companies such as Vernons were forced to close their Pools offerings, and other companies sadly folded completely.

Littlewoods were still running though, and even though the glory days were well behind them they were still able to keep afloat by offering a wider range of games to play and by embracing the online movement. The company was eventually sold for £161 million and became known as Littlewoods Gaming, which was part of Sportech PLC. Sportech were also acquired both Vernons and Zetters, before announcing “The New Football Pools”, launching on footballpool.com, which is the platform you will still see today.

In 2017, OpCapita bought the firm from Sportech and they were able to rebrand back to ‘The Football Pools’.

As mentioned, the first “major” winner of the Pools was Nellie McGrail who won just over £205,000 back in 1957. But there have been plenty of other notable winners since then. 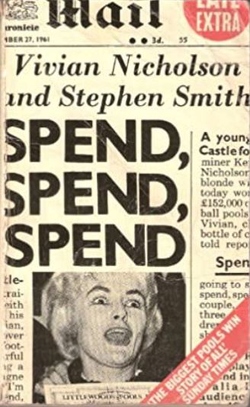 Keith Nicholson’s win of £152,000 in 1961 was far from the biggest ever, but it was a substantial sum of money at the time, worth an estimated £3 million in today’s money. But it was Keith’s wife, Viv, that took the headlines, stating she was going to “spend, spend, spend” their new found wealth.

Viv did just that, spending fortunes on cars, clothes, holidays and houses. This eventually came to an abrupt end following Keith’s untimely death, when Viv was declared bankrupt having worked her way through the lot.

The first millionaire made by The Pools was one Barry Dinsdale, from Kingston upon Hull, scooping a massive £1,910,972 in 1987. 4 years later Rodi Woodcoock won just over £2 million, and since then plenty of multi-millionaires have been paid out thanks to successful Pools bets.

The biggest single winner so far though was that of Michael Elliot, winning just over £3 million from the new Pools jackpot in 2010. His eight 2-2 draws came in from games across England, Spain and Scotland.