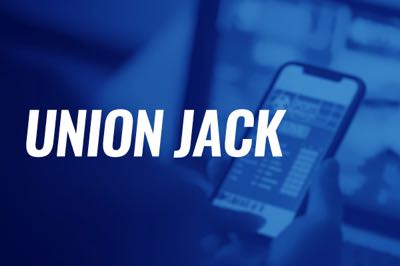 We have detailed a wide range of different possible bets already, from the simplest double to a monster 10-fold, as well as looking at more complex wagers, such as a combination tricast, a Flag and an Up and Down bet. A Union Jack definitely belongs at the more unusual, specialist end of the wagering catalogue and is quite probably not a wager too many punters, especially those unfamiliar with a betting shop on the high street, will actually know.

Here we will take a look at this slightly “old school” wager, explaining how it works, how you can go about placing it and what variations there are. So, if you thought a Union Jack was just a flag (yes, we know the flag is actually called the Union flag but that’s a separate issue!), think again!

What Is a Union Jack Bet?

A Union Jack is a multiples bet that includes a massive nine selections. The only other major bet with that many is a straightforward 9-fold acca but a Union Jack is rather more complex than that. The bet uses a three-by-three grid and each of your selections is placed in one of the nine boxes.

The standard Union Jack uses these selections to make up eight different trebles. As with other multiples bets, these eight separate wagers each require an individual stake, such that a £10 Union Jack will cost £80 in total. You can see an example of the grid below, along with how you might decide to fill it.

Each vertical, horizontal and diagonal line forms a treble, so the three across, the three down and two diagonals give us the standard eight trebles of a basic Union Jack. We can see these eight bets below:

A Union Jack is an unusual bet in that whilst you might have a return with just three of your nine selections being correct, it is actually possible to lose your entire stake, and all eight bets, whilst getting as many as six out of nine right. The two grids below highlight how these situations might happen, with the winning individual picks bolded.

Three Correct Leads to a Return

As well as this unusual quirk, it is important to be aware that each of your nine picks is far from being equal. The selection at the centre of the grid, in this case – Man City – will feature in four of your eight trebles: one vertically, one horizontally and both of the diagonal bets. The four corners picks, in our example United, Liverpool, Leeds and Arsenal, will feature in three (horizontal, vertical and one diagonal). The remaining four picks, Everton, Chelsea, Newcastle and Spurs, do not have a place in either of the diagonals and so play a part in just two of the trebles.

What all of this means is that unlike an accumulator and many other bets with multiple selections, the order of your bets is crucial. In an acca, you can add your picks to the slip in any order and it doesn’t matter. All of them need to win, if any lose the whole bet loses and each selection only counts once. As we have seen, with a Union Jack, this is not the case. Let us number the grid to illustrate this more clearly.

So, based on the numbering above, the bets feature as follows:

It is crucial, therefore, that you put your strongest selection in the middle, or Bet 5 as per our grid. This contributes to half of the total of eight trebles so its success may make or break the whole Union Jack. Depending on your approach to betting this may be the pick at the shortest odds, which may or may not be the one you have the most confidence in actually delivering. Punters who are more concerned with value may put the selection they believe to be the best value there, even if it is a slightly riskier proposition than another pick.

Your next four strongest – however you personally define that – options should fill spaces 1, 3, 7 and 9 on your grid as these picks will be part of three of the trebles. Bets 2, 4, 6 and 8 are less crucial and feature in just two of the trebles. Should one or more of these lose it will have the smallest impact on your overall outcome. As such, you may feel this is the place for bets at longer odds, or perhaps ones you just aren’t convinced about.

Returns from a Union Jack

Calculating your returns is not straightforward if you are used to knowing beforehand what you stand to win. What you get back will very much vary on which of your nine picks win and which trebles this means you can form and, of course, the odds of these winners. Let us revert to our original example to show you how this might work in practice. As before, we have bolded the winning selections.

As we can see, this was a very successful Union Jack, with eight of the nine selections winning and just Liverpool fluffing their lines. However, with Liverpool, or Bet 3, being involved in three trebles, that means we lose three of our eight bets. Let’s look on the bright side though, five winning trebles should lead to a rather healthy result.

You can calculate the winnings manually of course by working out what each of the five successful trebles will pay out. Alternatively, there are online betting calculators that do the numerical heavy lifting for you. However you do it, you will find that a Union Jack like this would return a very nice sum of £400.94. Had Liverpool also won that return would jump quite significantly to £651.15 and, of course, as with all bets of this nature, all selections must win for all bets to win.

What Can I Bet on With a Union Jack?

In theory, you can include any sport, market or event in a Union Jack bet, as long as the selections themselves can all be combined as trebles. Check out our feature on trebles themselves for more information on the notion of related contingencies that could stop some picks from being combinable.

Our Union Jack is all football, all the same market and all the same league. However, there is nothing to stop you from adding whatever sports, events and markets you want and even combining from a range of disciplines. So, for example, on a busy weekend of sport you might have a few football matches, a couple of tennis matches, the big horse race of the day and a few bets on rugby. In short, if the selections are valid for inclusion in a treble, there is no reason why you can’t include them in a Union Jack.

How Can I Place a Union Jack?

Of course, it is all very well saying that you can use whatever sports you want for this bet but how do you actually place it? Can you even make this bet at a normal online bookmaker? Well, as far as we are aware this is not a bet that any major online UK bookmaker offers.

However, that is not to say that your Union Jack betting dreams are doomed because you have two options if you like the sound of this unusual wager. First of all, you could visit your local betting shop. Some may actually have special Union Jack printed grids, in which case you just need to complete the slip and make your bet. If they don’t then you might need to ask a member of staff if they accept Union Jacks.

We suspect there is every chance they will have no clue what you are talking about though. If that is the case then it could be worth asking them to check with an older or more experienced member of staff. This is a rather outdated bet nowadays and has perhaps fallen out of favour but you may still be able to place it in a shop.

That said, if heading to your high street and talking to a real person all feels a bit 20th century, you can effectively build your own Union Jack online. In the above example, we have included a bit of MLB Baseball, NFL American Football and MLS Soccer in the USA. The eight bet slips should look something like this: 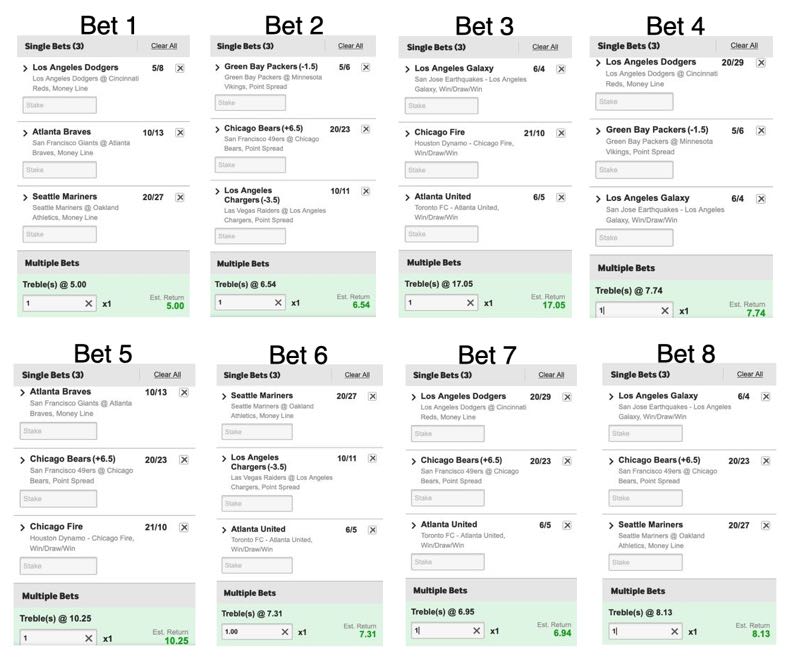 As we have said, it is, after all, simply a series of trebles and all online betting sites offer you the opportunity to construct your own trebles. You will have to complete eight separate betting slips, which will be rather time-consuming, but even so, just add the three relevant selections each time and make your eight mini-accas and away you go!

Now we understand the basics of a Union Jack it is worth noting that there are ways to make this unusual wager even more interesting! These Union Jack variations basically take the standard bet and add a number of other wagers on. More separate bets mean the potential for a bigger win but also requires a larger total stake, with each component requiring its own stake.

The most typical variations of a Union Jack are as follows:

Once again, such bets are not typically offered by online – or indeed probably offline – bookies so if you want to make these wagers you will need to really put the effort in. You would have to manually stake each of the various parts of the bet and all in all we can’t help but feel you would be better simply placing one of the more all-encompassing wagers that can be placed automatically at almost all of the top betting sites.