If you’re new to the betting industry you may not be aware but there are literally hundreds of online betting sites to choose from. They seem to crop up on a monthly basis and with each one the company behind them are hoping to become the next big high street bookmaker.

The harsh reality is that to make it in the industry, you need a large database of players behind you. Given that it’s now as saturated as ever, this has become even harder and even though money is to be made with smaller sites through things like white label sportsbooks, the task is still a tough one.

Like any business in a saturated marketplace, if they aren’t making enough money to cover costs and overheads, then their doors will close. The online betting industry is no exception to this rule and there are a number of sites that have closed over the years. There are a plenty of reasons why each one has closed, but each is likely different to the other. Here we have listed a number of betting sites that closed down and a look at what might have led to the demise of each site. 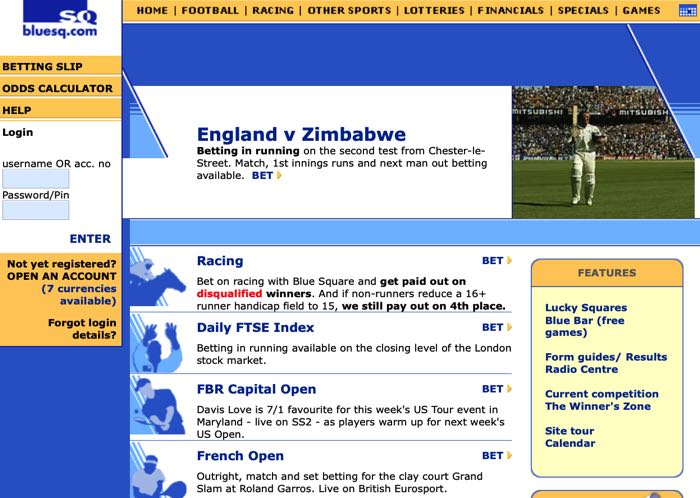 Blue Square was founded in 1999 and were widely regarded as one of the bigger betting platforms in the UK. They had been able to strike up sponsorship deals with the English Football Conference and were definitely a brand that was highly thought of within the industry.

At the time of the bookmaker closing they were owned by the Rank Group after having been bought for £63 million in 2003. The purchase was one of the first (and biggest) at a time where online betting was just starting to develop into the multi-billion-pound industry that it is today

The site was predominantly made up of players from the UK, although they had enjoyed success with offering a multi-currency platform, including Australian Dollars (AUD), Canadian Dollars (CAD), Euro (EUR), Japanese Yen (JPY), Singapore Dollar (SGD) and the US Dollar (USD).

By 2010, the company had started to venture into the world of online casino and poker. Whilst it’s never been admitted from the company, it’s widely thought that the aggressive move into these sectors is what triggered the demise of the company. A fairly out of the blue announcement was made in 2013 that Betfair would be buying the company plater accounts (estimated to be around 120,000) and other assets from the company in a deal said to be worth just £5 million.

All accounts were moved over onto the Betfair platform and that players would be able to get all their money and bonus points on Betfair that had been accumulated on Blue Square. At the time it was a strange move for Betfair who were very much seen as a betting exchange rather than a traditional sportsbook, but really, the move created a great platform for them to set up more traditional sports betting options to work alongside their already successful betting exchange. Given that the price was less than 1% of their revenue for that year, it seemed like an easy and obvious choice.

Weirdly, not an awful lot was said by Blue Square regarding the deal or regarding their future. Just a few days later the site was taken offline and you hear very little of them. Another strange point to make is that Blue Square was purchased by Rank Group, which also owns 888Sport. So, why didn’t 888 acquire the player database, instead of letting it go to a rival brand? Questions we are likely never going to get answers to. 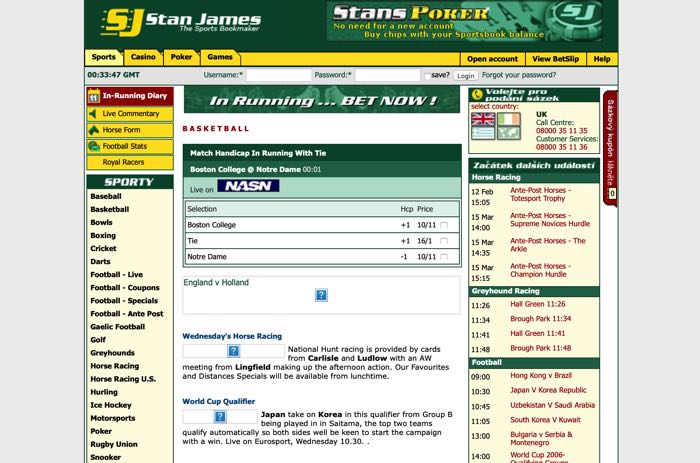 It’s probably fair to say that Stan James are one of the most iconic brands in UK betting. They had been trading within the betting industry since 1973 and at one point were flourishing. They were able to run multiple successful TV ad campaigns and are probably the biggest brand to close in this list.

The company were founded by Steve Fisher and James Holder, opening their first betting shop in Compton, Berkshire. They were seen as almost immediate hit and went on to open multiple stores all over the UK. They were keen to embrace online betting and were one of the first to get involved with it all. As part of the development of the brand they then ventured into international markets, such as Australia, France and Ireland, before eventually working in over 120 countries worldwide.

Their growth was taken to new levels when they started to acquire other betting companies, such as Betdirect and Better. Another 27 shops were bought from Pagebet when they went bust in 2010.

In 2015, the company were bought by Unibet. With it all the accounts and assets were handed over to them. For a few years the Stan James brand continued to work independently of Unibet, but most in the industry knew that this was going to be a matter of time, more than anything.

The End for Stan James

Their virtual doors closed for good in February 2018. Unibet stated that they were unable to profitably keep the company running and that all Stan James accounts would be transferred across to the Unibet platform, along with any outstanding balances or unsettled bets. 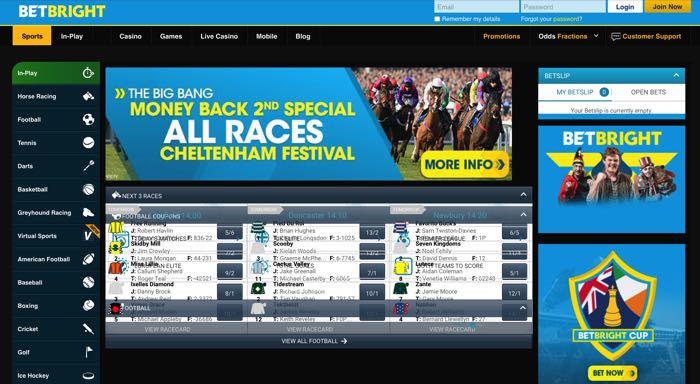 Betbright’s closure in 2019 was one of the most controversial that we’ve come across and one that’s left a really bitter taste for thousands of online bettors. The company were formed in 2013, so they hadn’t been trading as long as sum before they were wound up. What was unique about Betbright is that they were using all of their own software and unlike many, weren’t using that of any white-label solutions.

As a result, the platform was very popular with punters as it offered something a little different. The company were flying. They appointed the likes of Rich Ricci as Executive Chairman, Sarne Lightman as MD of Sportsbook & Casino who had previously worked with PokerStars and were looking to add almost 130,000 new accounts in 2018 alone, which would double their revenue figures for the year.

During this time, the company had won many awards for innovation and design within the industry. But it was announced in March of 2019 that the company were closing their doors and selling to 888 Holdings for a fee worth £15 million. The first thing that caught people’s eye was the sum, given that this was just half of their projected revenue for the year. It later turned out that the fee was for the sale of their betting platform and not their player database.

This is a highly unusual situation where the company has no platform to hose their player database. The second point was that the announcement came just 7 days before Cheltenham Festival, one of the biggest betting weeks of the year for most bookies. Given that the company was closing, they stated that all unsettled bets were to be voided and bettors would in fact lose this money.

Betbright gave punters just 30 days to withdraw their money from their accounts and any money left over would be taken. Eventually it was decided that voided bets would be refunded, but not after a lot of pressure from the UK Gambling Commission to do the right thing.

As quick as they looked certain to rise to betting stardom, the Betbright brand had gone and with it, thousands of betting accounts. This is a rare occasion where punters have been left out of pocket due to the winding up of a betting company. 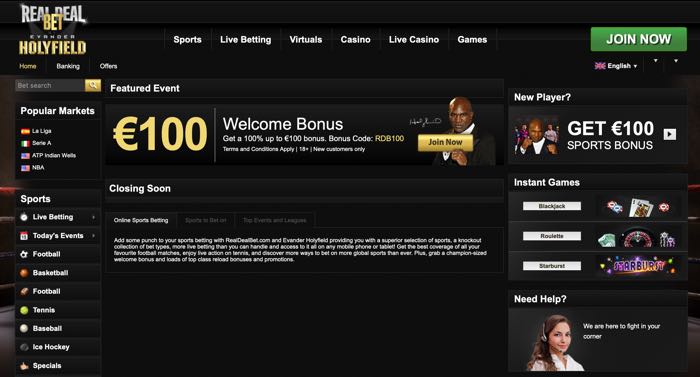 Real Deal Bet jumped onto the betting scene in 2015 and were unique in that they had boxing star Evander Holyfield as the face of the business. In fact, he was so prominent throughout the site that if you didn’t know better, you would think he owned the brand, which was not the case.

They were actually owned by Blue Star Planet, who had a number of other gambling platforms, more on that later. Even though Real Deal Bet hadn’t been around for that long, they had seen quite a bit of success in a relatively short period of time, plus they included the SB Tech platform that lots of people are very familiar with, so it wasn’t as if it was an alien platform for most new users.

Whilst never a poor bookmaker, you always got the feeling they were a bit thin on the ground and it was announced in 2018 that they were closing their doors for good. The deal with Holyfield and the fact they ran several marketing campaigns that didn’t have great success from this, were ultimately the backbone of their demise.

But, given that they were part of the Blue Star Planet group and these guys also owned that of 10bet, another popular betting site, the closure meant that player accounts and funds were simply moved across. Given that both bookmakers were essentially clones of each other, it made sense to go down this route and it meant that punters were using a platform they were very familiar with, just with different branding. 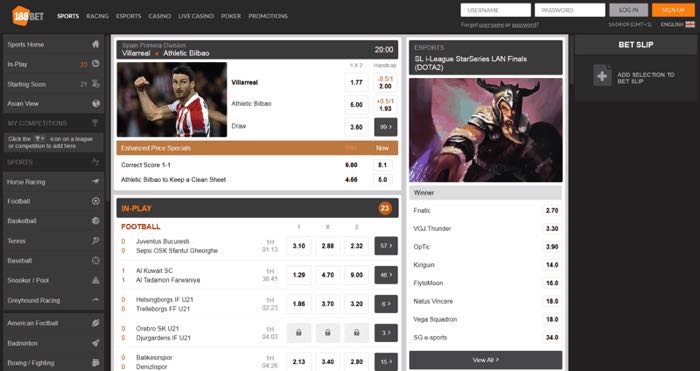 You may be reading this and thinking that 188bet are still open for business and at the time of writing, you would be right. But, in March 2019, they announced that they would be withdrawing from the UK and Ireland, in a strange turn of events given that they are likely two of their biggest territories for punters.

However, the manner in which they have gone about it is very similar to that of Betbright and one that we hope isn’t going to start to become the “norm” in the betting industry. As per Betbright, 188bet stated that they would be terminating accounts situated in the UK and Ireland, given 6 months for players to withdraw their funds.

What annoyed a lot of players was that any ante post bets that weren’t settled within 3 months of the March notice would be voided, this includes any multiple bets that are not settled in this time as well. Given that lots of people bet on horse racing markets months in advance, it means they are going to miss out.

The good thing for players here is that 188bet is still going to be open which ensures funds, but it does mean that frustration grows when they state ante post bets will be voided if not settled within a pretty short timeframe. 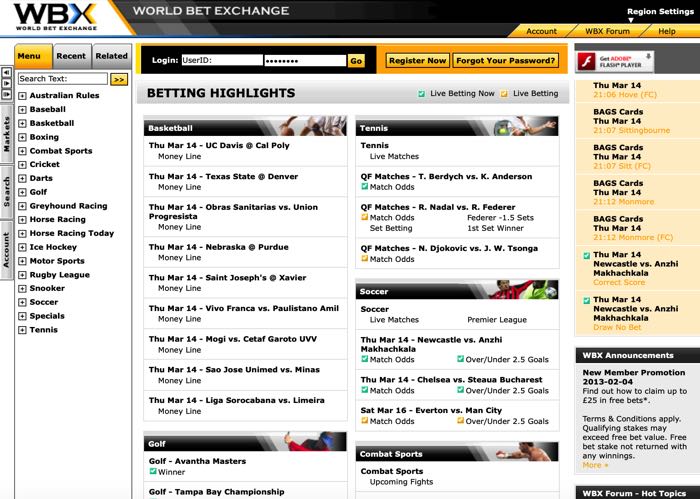 WBX (World Betting Exchange) was set up in 2002 and were trying to get in on the ever-growing industry of the betting exchange. At the time, the industry was still growing, but Betfair had started as clear front runners and were already an established brand. But, WBX didn’t open their doors until 2006, some 4 years after starting the company.

There was a number of reasons behind this, but founder, Malcolm Gray, had stated that they were looking to make sure their platform performed perfectly before launching.

However, by 2006 Betfair had millions of customers and were trading huge sums of money of their exchange. This made it an even tougher battle for WBX to compete, let alone thrive.

They set out to “change” the industry and “put the public back in charge” by offering a lower rate of commission than Betfair used to charge. This was a ploy that most betting exchanges adopted and one that didn’t always work. They claimed that users would save up to 35% in commission if they were to use WBX over Betfair.

The move to lower commission did work for a while. In 2008, they stated that over £500 million was wagered and since its inception in 2006, this number had grown to over £1 billion.

Ousted by Their Rival

However, this was about as big as it got for WBX. Betfair grew bigger and stronger, including a traditional bookmaker and increasing the number of sports and markets that they were able to offer. WBX, like so many other betting exchanges, eventually closed their doors in 2015 citing rising costs in levies and an overwhelming force in that of Betfair for their closure.